Zynk is a Robot from the past, one of the inventions of the Ancients. He is met in Moun, protecting the townspeople and tags along with the Force once you leave Moun. He flies the Nazca Ship for you and when you go to Roft and Petro dies he’ll join. His movement range is a mere 4, so I recommend using either a Running Pimento on him or equipping him with the Running Ring.

Zynk’s Headquarters Quote:
“We have been fighting the devils since ancient days…” 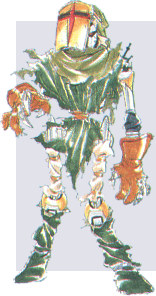 The graphs below show the growth rate of Zynk’s statistics throughout the game, starting at level 1 (level 1 stats are based on growth rate if the character joined at any other level). These are adapted from the ASCII/Famitsu Shining Force II Guide Book, and so should be pretty accurate! However, please note that the charts are based on a standard game, in which no extra training is given to any characters. The growth may vary with extra training, and even from game to game, due to the random level-ups.

Zynk does not use weapons, since he is in himself a weapon, having both metal arms and a laser. As with most ‘special attacks’, the laser isn’t used as often as it might be, but his regular attack is strong enough to make him a worthwhile addition to the force.