Claude is one of the special characters, you need the Arm of Golem from Moun to make him join. Pictures of it’s location and his location are linked to in the pictures section of this page. South of Roft there is a small path along the coast, which can be followed. It leads to a series of bridges linking a number of small islands. On one of these there is a cave, go in it and inside of it you’ll meet Claude. If you don’t have his arm he’ll just complain and won’t join. In this cave you’ll also find a way back to Parmecia. At the bottom you’ll see some dark panels on the floor, one on the left opens up a path which leads back to the Magic Tunnel below Ribble. Claude has a good defence but his low movement (4) and agility make him a poor member of the Force, likely to miss most of the action in battle because he can’t move with the rest of the group.

Claude’s Headquarters Quote:
“I was created by ancient magic. It’s my destiny to defeat the devils!” 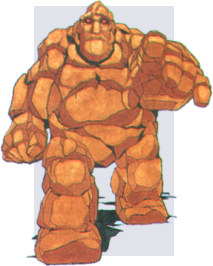 The graphs below show the growth rate of Claude’s statistics throughout the game, starting at level 1 (level 1 stats are based on growth rate if the character joined at any other level). These are adapted from the ASCII/Famitsu Shining Force II Guide Book, and so should be pretty accurate! However, please note that the charts are based on a standard game, in which no extra training is given to any characters. The growth may vary with extra training, and even from game to game, due to the random level-ups.

Claude does not use weapons, favouring his huge rocky fists. His attack, however, is somewhat weaker than the rest of the Force’s should be by now. This is another reason why not to use him, but of course it is up to you.