Peter is a Phoenix who visits the town of New Granseal, only to be mocked by the inhabitants. He cannot use magic. After speaking with the King he tags along with the Force and is computer controlled until you have travelled to Bedoe and spoken with the God Volcanon. Peter is certainly one of the more powerful characters, easily gaining levels due to his strong attack. He generally gains 2-3 HP per Level and 2 attack points. Despite his odd appearence before promotion, he is unmatched by any of the Force. After promotion to PHNX the land effect does not effect his movement and if he dies he’ll revive himself after the battle. Not only this, but it is clear that he builds up a fire resistance, taking only half damage from Blaze etc.

Peter’s Headquarters Quote:
“Phoenixes don’t need a priest. We can revive ourselves.” 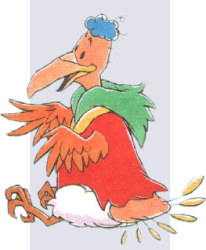 The graphs below show the growth rate of Peter’s statistics throughout the game, starting at level 1 (level 1 stats are based on growth rate if the character joined at any other level). These are adapted from the ASCII/Famitsu Shining Force II Guide Book, and so should be pretty accurate! However, please note that the charts are based on a standard game, in which no extra training is given to any characters. The growth may vary with extra training, and even from game to game, due to the random level-ups.

Peter cannot use weapons, instead his attacks are unique to his species. Before promotion he thows powerful rings of energy at his opponent and after promotion he hurls a strong tunnel of wind! Both are excellent attacks, causing a lot of damage. It can, however be to your disadvantage if he is muddled and attacks the Force, he could wipe them out quite easily.