Far cuter before promotion, Kiwi can be found in Old Granseal when the animals have been released from the pet shop. He’s all alone and hungry in a little house when you find him, so comfort him and give him a name and he’ll join you. His default name is Kiwi. His defence is high because of his protective shell, but he is not very resistant to magic. His HP hardly ever increase, though his defence makes up for this for a while. Though some seem to find that he is good, I usually chuck him out first chance I get. By the end of the game his defence is just about level with that of the other characters and his HP doesn’t seem to go much beyond 40, while the others are ranging from 70 to well over 100. His attack isn’t much to shout about either, and he can’t even use magic. Try using him as bait if you like 🙂 His only saving grace IMHO is that after promotion he can ‘fly’. 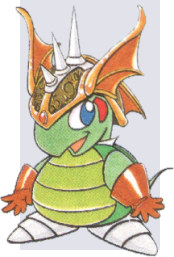 The graphs below show the growth rate of Kiwi’s statistics throughout the game, starting at level 1 (level 1 stats are based on growth rate if the character joined at any other level). These are adapted from the ASCII/Famitsu Shining Force II Guide Book, and so should be pretty accurate! However, please note that the charts are based on a standard game, in which no extra training is given to any characters. The growth may vary with extra training, and even from game to game, due to the random level-ups.

Kiwi is more into the defensive than offensive, preferring to use his protective gear as a weapon. His crusty helmet is used before he is promoted, and as you might well imagine this does not do much damage! After promotion his attack varies, most often being his curling up into a ball and throwing himself at the monster he faces, though on occasions he belches out red hot flames. The prospects of this might make him appear worthwhile, but the instances of this attack are few and far between.