Jaro the Pegasus Knight will join you half way through battle 32, when you are fighting your way to reach the village of Moun. When you first meet him, he is fighting against you, on the side of the devils, but he decides he no longer wishes to work for them, and starts fighting alongside your warriors (although he is controlled by the computer for the duration of this battle). This might cause you to question his loyalty, but do not doubt him, this is a permenant change of heart and with a bit of work he can be a great asset to the legendary Shining Force.

Unfortunately, when he changes sides, Jaro’s stats decrease, most likely to even him out with the rest of your Force. It could also be because the devil army is no longer supporting him with their evil powers. Also during the battle, Jaro is called “Jar”. Very odd indeed!

Jaro’s Headquarters Quote:
“Why are they so excited? I fight for myself, not anyone else!” 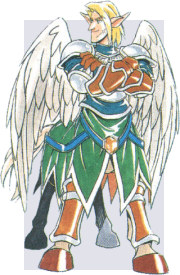 The graphs below show the growth rate of Jaro’s statistics throughout the game, starting at level 1 (level 1 stats are based on growth rate if the character joined at any other level). These are adapted from the ASCII/Famitsu Shining Force II Guide Book, and so should be pretty accurate! However, please note that the charts are based on a standard game, in which no extra training is given to any characters. The growth may vary with extra training, and even from game to game, due to the random level-ups.