Frayja the Vicar is in Pacalon Castle the first time you meet him. He’s feeling terribly guilty about something he’s done. It turns out that a small town on the north-west coast of Parmecia is the only thing blocking the Devil Army from invading the mainland, and Frayja was the one who had to make the choice to lock it’s gate, and it’s people inside to prevent a massive loss of life. It was the lesser of two evils, but evil none-the less, and all he can do is feel sorry for his sin. When you return to Pacalon after having been to see Mitula, he’ll go with you to Moun, to see if there are any survivors. Once he has opened the gate and you go inside the town he insists on joining the Force and fighting the battle in the town. The last person on your list of fighters will be taken out for this battle and replaced by him for the duration of this battle. This really annoys me, so I usually cast Egress and replace him!

Frayja’s Headquarters Quote:
“I can’t forgive them! Evil must be purged from the Earth!” 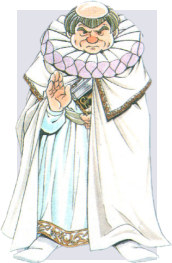 The graphs below show the growth rate of Frayja’s statistics throughout the game, starting at level 1 (level 1 stats are based on growth rate if the character joined at any other level). These are adapted from the ASCII/Famitsu Shining Force II Guide Book, and so should be pretty accurate! However, please note that the charts are based on a standard game, in which no extra training is given to any characters. The growth may vary with extra training, and even from game to game, due to the random level-ups.