Chester is one of Bowie’s school friends from the town of Granseal. He’s a centaur and cannot use any Magic. He is quite strong, and certainly one of the better Knights, he becomes even better when promoted with the Pegasus Wing to Pegasus Knight. As a Paladin he is not quite as useful as having another flier.

His weapons for both promotions are the same, consisting mostly of Lances and Spears. It’s always a good idea to let him keep his spear when he gets a lance, as the spear has a larger range of attack and can prove to be useful still. While it can be annoying to have to wait to promote him (the Pegasus Wing is in Pacalon, quite a way through the game) it is worth it to see him with wings! 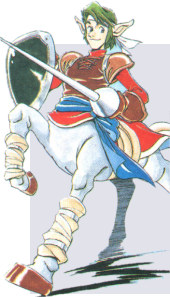 The graphs below show the growth rate of Chester’s statistics throughout the game, starting at level 1 (level 1 stats are based on growth rate if the character joined at any other level). These are adapted from the ASCII/Famitsu Shining Force II Guide Book, and so should be pretty accurate! However, please note that the charts are based on a standard game, in which no extra training is given to any characters. The growth may vary with extra training, and even from game to game, due to the random level-ups.