After you’ve spoken to Creed and Evil Spirit, you can choose one of 4 characters to aid you in your quest. Tyrin the Mage is one of these, he was also the leader of the people on Floor World. If you don’t pick him, you can recruit him by going back to Creed’s mansion after Frayja has opened the gate at Moun. His promotion item is the secret book. While Karna is usually considered the best to choose of the four, Tyrin should not be underestimated, he can become a strong spellcaster and a valuable asset to your Force.

Tyrin’s Headquarters Quote:
“My powers should be a great help to you!” 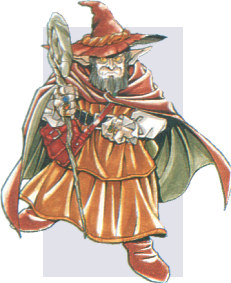 The graphs below show the growth rate of Tyrin’s statistics throughout the game, starting at level 1 (level 1 stats are based on growth rate if the character joined at any other level). These are adapted from the ASCII/Famitsu Shining Force II Guide Book, and so should be pretty accurate! However, please note that the charts are based on a standard game, in which no extra training is given to any characters. The growth may vary with extra training, and even from game to game, due to the random level-ups.

Below is a list of the spells learned by this character, and at which level the character needs to be for the spell level to increase. When Tyrin is promoted to SORC, all previous spells are lost, and as such the levels at which he learns the SORC spells are purely levels gained after promotion.