Dr. Rohde is a historian, living in the town of Hassan (see animation), and only he can halp you get the caravan. But what does a boy like Bowie have that would interest a historian? The Achilles Sword! When you have the Achilles Sword, take it to Rohde and he’ll tag along with the Force. Without him you can’t progress and fight the Taros. He’ll join up as a member of the Force when you clear the rocks at North Cliff. He’ll use the Cannon as a weapon and become a Brass Gunner.

Rohde’s Headquarters Quote:
“This is great! I love this cannon!” 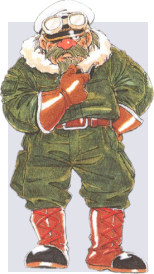 The graphs below show the growth rate of Rohde’s statistics throughout the game, starting at level 1 (level 1 stats are based on growth rate if the character joined at any other level). These are adapted from the ASCII/Famitsu Shining Force II Guide Book, and so should be pretty accurate! However, please note that the charts are based on a standard game, in which no extra training is given to any characters. The growth may vary with extra training, and even from game to game, due to the random level-ups.