Karna is one of the four characters you can choose from at Creed’s Mansion, however if you don’t choose her you can return to recruit her (and the other two you turned down) by returning to Creed’s after Frayja opens the gate of Moun. She’s a Priest and therefore uses healing spells, with one exception – Blast.

Her weapons are not very powerful for attacking, which can lead to her becoming weak, but I recommend that you keep using her as with the Vigor Ball she can have a special promotion to Master Monk. She’ll have the same spells as she would have had as a Vicar, but the Master Monk weapons are far more powerful and by making her cast a Heal or Aura spell every move she soon gains levels. It’s not uncommon to end up with a level 99 Master Monk. You won’t believe how strong she can really be until you try her!

Karna’s Headquarters Quote:
“I’m not afraid of devils! When’s the next battle?” 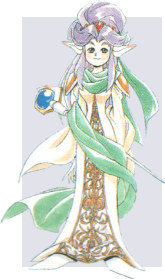 The graphs below show the growth rate of Karna’s statistics throughout the game, starting at level 1 (level 1 stats are based on growth rate if the character joined at any other level). These are adapted from the ASCII/Famitsu Shining Force II Guide Book, and so should be pretty accurate! However, please note that the charts are based on a standard game, in which no extra training is given to any characters. The growth may vary with extra training, and even from game to game, due to the random level-ups.